On its face, the announcement was a head-scratcher. 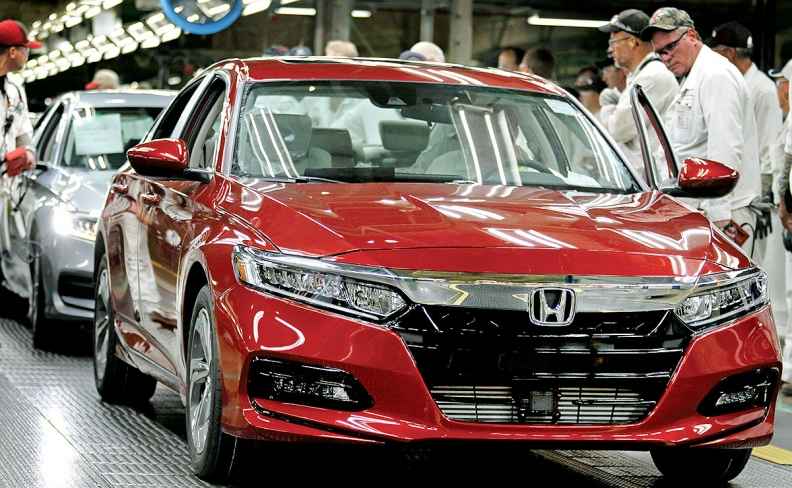 Honda, an automaker known for its conservative approach to expanding production globally, revealed in September that it was adding 300 new jobs in Ohio and pumping $267 million into production of the 2018 Accord midsize sedan.

That's a bold move considering the headwinds the 10th-generation Accord — and all midsize sedans of its ilk — are facing.

For the first nine months of 2017, the segment has contracted 15 percent vs. the same period a year earlier, to 1.4 million vehicles. Every model in the category has seen a sales decline in 2017, most by double digits. In 2016, segment sales dropped 12 percent overall.

Of course, sedan sales have been slipping for years, and it's not something that's expected to stop: IHS Markit forecasts the segment will account for 1.8 million sales in 2020 and 1.72 in 2025.

"I'm not sure that the sedan segment in the U.S. will ever be as large as it was 10 years ago," said Mike Ramsey, a research director at Gartner. "Even if we settle out at 16 million [SAAR], the percentage going to sedans is likely to keep flat or decline."

While that may make Honda's $267 million investment seem out of step, alas, the devil is in the details.

Honda's investment is less a story about expanding its capacity for building Accords and more about facility and technology upgrades that were necessary for the new model.

A bulk of that investment was for the company's Marysville, Ohio, plant where the Accord and Acura TLX and ILX are built.

The welding department, new from the ground up, features 342 new robots and accounted for $165 million of the total investment. This brings to the Accord a construction technique called Inner Frame that saves weight and boosts chassis stiffness.

Honda uses a new laser brazing process on the 2018 Accord to join the roof to the body side panels (eliminating that black plastic garnish many sedans use to cover the rain channels).

Since the coupe body style was dropped for this 10th-generation Accord, Honda had to expand its rear door-line capabilities.

Of the 300 new jobs, 200 are headed to the Marysville plant where they'll largely facilitate the new assembly technologies rather than simply build more Accords.

Despite the upgrades, the capacity of the Marysville plant remains at 440,000 vehicles. Last year it built 436,846. Production this year has been considerably slower — 281,206 vehicles built year-to-date, according to Honda.

Meanwhile, $47 million of the $267 million went to Honda's Anna, Ohio, engine plant. It's Honda largest engine plant in the world, and it's where the company builds 1.5-liter and 2.0-liter turbocharged four-cylinder engines. The remaining 100 new jobs announced last month land in Anna.

So, what happens if the sedan segment drives off a cliff and takes the Accord with it? Will these upgrades be for naught?

Mostly no, says Steve Rodriguez, manufacturing manager for the Accord.

Honda uses the Inner Frame construction method on the Civic and the CR-V — two models that use the same chassis architecture as the Accord.

"Flexibility is kind of a hallmark — it's our responsibility to make sure going forward that we are flexible to be able to move models" to different assembly lines, Rodriguez said. "Without looking into a crystal ball, we're always trying to get more flexible so when changes come, we're in a better position for them."

The engines built at Anna are quickly becoming ubiquitous throughout Honda — and soon Acura's lineup.

Nevertheless, some of Honda's investment is Accord-only, including such elements as the new roof-brazing process and the rear-door process, Rodriguez said.

Despite the headwinds for the segment, Honda is feeling good about the Accord's sales prospects.

"I don't expect to sell fewer Accords in 2018 with this great new product," Ray Mikiciuk, assistant vice president for sales, told reporters during a conference call about the $267 million investment.

Even as the segment declines, leaders such as the Accord and Toyota Camry could be well-positioned to lap up leftovers when rival brands ultimately leave the segment altogether to focus on higher-margin trucks and CUVs.

"Maybe they figure, 'Well, the segment will get smaller and we'll take a bigger share of it,'" Ramsey said. "Honda has been successful with that in the past."

Previous article Western China generates growing...
Next article WHAT IS THE BEST PLACE TO BUY THE...