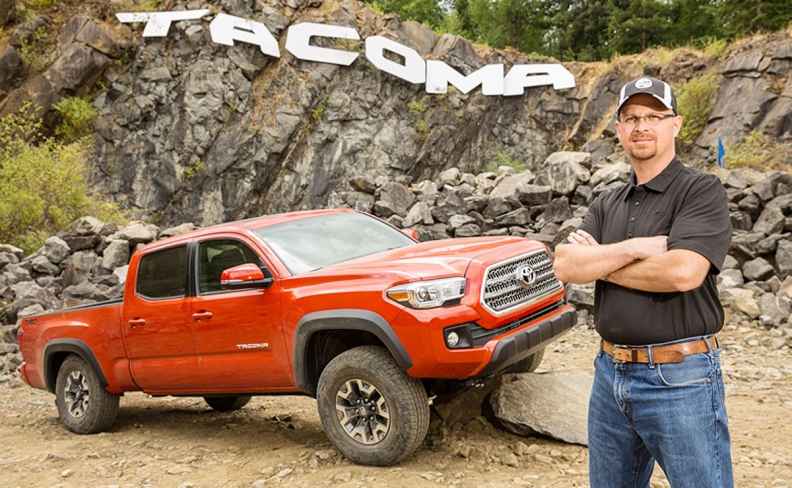 If there were any doubt about his macho 4x4 credentials, Sweers insists he had never even sat in a Prius until being transferred to Japan last year. In fact, the hybrid's noiseless push-button ignition baffled him so much that he repeatedly pushed it thinking something was wrong.

Sweers is lead engineer for the full-size Tundra and midsize Tacoma pickups, and Sequoia, 4Runner and FJ Cruiser SUV nameplates. He was brought to Toyota headquarters to help design their next-generation platforms with one mission in mind: Ensure Japanese engineers fully fathom the uniquely American mania for his beloved trucks.

"It's difficult for them to understand," Sweers said in a Feb. 15 interview at the global nerve center here. "I see my role as being a bridge to help Toyota Motor Corp. understand the North American truck requirement. Having that North American voice is important."

Japan's biggest automaker is injecting more American voice than ever as it tries to nail the make-or-break next-generation truck platform due as early as next year.

Sweers, a 28-year Toyota veteran who still has a family farm near Lansing, Mich., arrived in Japan in June 2017 for a two-year assignment. It wasn't long before he was promoted to executive general manager, a post straddling the executive suite and lab floor.

He oversees a team of 42 Americans, one of the biggest ever, all flown to Japan to Americanize Toyota trucks. The stakes are high for the 54-year-old — and Toyota.

Toyota must defend the Tacoma's position as top-seller in the midsize pickup segment amid an onslaught of new entrants. It must make the Tundra a real rival to the all-but-unassailable Detroit 3 offerings, the Ford F-150, Chevrolet Silverado and Ram pickup. And Toyota must make the body-on-frame SUVs viable options in an age of ever-more stringent fuel economy.

What's more, its engineers must develop a platform that factors in the disruptive trends of electrification, connectivity and autonomous driving for, yes, lumbering trucks.

"We have tons of engineering challenges ahead of us in the truck and large SUV market," Sweers said. "You're going to see trucks change faster than you've ever seen trucks change."

The redesigned Tundra, Tacoma, Sequoia and 4Runner will ride on the Toyota New Global Architecture. The automaker is launching the so-called TNGA modular vehicle platform around the world, one segment at a time. It has been introduced in the Prius hybrid and Camry sedan and will yield cars and trucks that are lighter and simpler to build and modify.

Sweers declined to say when the TNGA truck platform will arrive, but a redesigned Tundra full-size pickup could land as early as next year, some five years after its last model change.

A top goal for trucks is consolidating components and cutting the number of platforms while better tailoring models to regional needs. Toyota must reinvent the lineup to be greener, while keeping the power, functionality and rugged looks demanded by truck fans.

But Toyota's biggest challenge is something more intangible.

"It still has the image of a 'foreign' automaker with many truck shoppers," said Karl Brauer, executive publisher of Autotrader and Kelley Blue Book. "Toyota needs to catch up in this area."

In trucks, the Japanese struggle with the emotional aspect of vehicle design, he said.

"Everything from styling to engine note to interior design and ride and handling has a subtle emotional aspect. Having the input of U.S. truck experts should help Toyota zero in on these elements," Brauer said. "Understanding your target audience is always critical to success."

Sweers is the first to admit plenty can get lost in translation.

Pickups of any size are rarities in Japan. When the odd F-150 or Ram rumbles down a tight Tokyo street, always a gray-market import, it stands out like an elephant on a putting green.

Developing one is as foreign to Japanese engineers as devising a Japan-market minicar, with its refrigerator-box dimensions and tiny 0.66-liter engine, would be for an American, Sweers said.

It's the little things Japanese engineers miss, like the gap between the tailgate and fender.

"When the tailgate goes down, and you're hauling loose material in the back, this beautiful fit and finish back here looks great until you fill the tailgate lip with material and you close it," Sweers said. "It damages the tailgate and now you have a very upset customer."

Or consider the notion that an American might fill his truck with mulch by day, then take his wife to dinner at a classy restaurant that night in the same vehicle.

"No one here can comprehend such a thing: 'You put your wife in a truck you worked in today?' " he said. "When you say it out loud it even sounds kind of strange."