SHANGHAI (Bloomberg) -- Each time An Fu Ford, a dealership in the western Chinese city of Chongqing, sells a car, workers fire a confetti cannon, showering the parking lot with colorful scraps of paper. 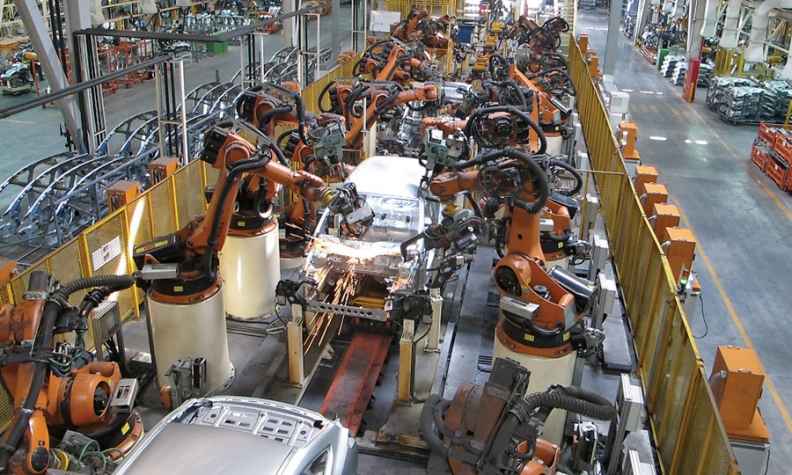 There’s a lot of paper to sweep up these days.

Car sales in western China are expanding twice as fast as in the country’s wealthy coastal cities, according to auto consultant Dunne & Co. in Shanghai. That growth has foreign automakers -- urged by the government in Beijing to “Go West” -- racing to increase production in an area where they can quickly increase sales, but where margins are likely to be squeezed as they sell to less affluent buyers.

In Chongqing, a vast inland metropolis sometimes called the Chicago of China, Ford Motor Co. is expanding a facility it opened with a local partner in 2001. By mid-decade, Chongqing will be Ford's largest production complex in the world, with three plants capable of assembling a total of more than 1 million vehicles a year.

Market leader General Motors Co. and its Chinese joint venture partners in 2015 plan to open a $1 billion factory in Chongqing that will pump out 400,000 cars annually. Japan’s Suzuki Motor Corp. this year will open a $770 million factory, its second in the city, which will double its capacity to 500,000 vehicles annually.

"Ten years ago, people would have rightly asked Ford, 'Why would you set up business in Chongqing?'" said Marin Burela, president of Ford’s joint venture with Chongqing-based Changan Automobile Co. "Now the question is, 'How did you know 10 years ago that this was the right place to be?'"

The push inland extends far beyond Chongqing. Chrysler Group LLC is expanding a factory in Changsha, in the south-central province of Hunan, to make Jeeps. Volkswagen AG is building a new plant in the far western Xinjiang region along the old Silk Road. Nissan Motor Co. next year will begin producing Infiniti luxury cars in the central city of Xiangyang.

Sufficient wealth to afford cars is "beginning to move through the country like a tsunami," Tim Lee, GM’s president of international operations, said April 19 in Shanghai.

GM expects to invest at least $11 billion in China between 2013 and 2016, adding four assembly plants and raising capacity by 30 percent to 5 million vehicles. "It’s important for us to be in position with plants, distribution, but more importantly with the right portfolio."

The right portfolio will include more inexpensive cars, because the western market is vastly different from China’s wealthier east coast. The luxury sedans that cruise the avenues of Shanghai and Beijing are a rare sight in western cities like Chongqing, Chengdu, or Guiyang, capital of the southwestern province of Guizhou. Economic output per person in Shanghai exceeds $12,000, while in Guizhou it’s less than $3,000, said Michael Dunne, president of Dunne & Co.

Westerners “aspire to luxury SUVs too, but buy what they can afford today -- functional sedans that cost between $10,000 and $20,000,” Dunne said. “Think New York City vs. Yuma, Arizona.”

While China’s economic growth slowed to 7.7 percent in the first quarter, automakers still see it as an attractive market which may this year become the first to top 20 million sales.

Automakers say what they lose on margins in western China they can make up with volume. GM expects the Chinese market will expand to 35 million vehicles by 2022 -- larger than the U.S. and western Europe combined -- and much of that growth will come inland. Volkswagen is seeking to sell more than 3 million cars in China this year -- 62 percent more than it sold in 2012 in western Europe -- as it expands beyond the east coast.

“We see more growth in the western regions,” said Jochem Heizmann, China chief for VW, which is considering a new budget model for the country.

Ford is counting on the west to help it vault from also-ran status in China to vying for leadership with GM, VW and South Korea’s Hyundai Motor Co.

“We absolutely want and expect to be one of the top four car companies in China,” Burela said in an interview in Chongqing. Last year, Ford ranked ninth, with 2.5 percent of the market, according to consultant LMC Automotive.

To woo less affluent buyers, Ford offers what it calls its Focus Classic, an older version it no longer sells in Europe or the U.S., alongside the redesigned Focus model introduced last year.

The dueling Focus strategy is on display on the white showroom floor of the An Fu dealership. A 119,900-yuan ($19,400) gunmetal gray Focus greets visitors. Next to it sits a Focus Classic, starting at 99,800. Focus sales more than doubled last month and Ford says it has become the top-selling model in China.

Displays of wealth in Chongqing are more modest than in Shanghai, where it’s not uncommon to see Lamborghinis and Bentleys jostling with Mercedes, Audis, and BMWs. At An Fu Ford, Xiu He Ping is content with a 140,000-yuan Ford Focus. To his wife, Chen Xue, the royal blue compact felt like a luxury liner.

“A beautiful lady likes the best-styled car,” she said, relaxing in the front seat in form-fitting jeans and red stilettos.

Domestic automakers have also identified the interior as the next driver of growth. Chinese brands that have struggled to compete with the foreigners in major cities have turned their attention inland.

Western customers are often buying their first car, upgrading from bikes or homemade motorized vehicles that resemble tractors, according to Jeff Schuster, an analyst with consultant LMC. The poorest might not qualify for a loan, so they are saving money in hopes of buying a car someday, Schuster said.

“How fast can these buyers get up the disposable income and economic scale to be able to afford some of the mainstream vehicles?” Schuster said. “That’s one of the question marks and one of the risks of western China.”

Ford is trying to address that by developing more affordable models, particularly SUVs and compacts. And while economy cars generate smaller profits than bigger vehicles, Ford figures it can make up for that by selling the same models it offers elsewhere.

Ford in China this year started selling the Kuga, a SUV sold under that name in Europe and as the Escape in the U.S. At the Shanghai auto show this week, Ford is displaying the Mondeo sedan, which is sold as the Fusion in the U.S. And from India it’s bringing the EcoSport, a small, low-priced SUV.

“As we move west, there’s an aspect of affordability and attainability that plays into it,” said Raj Nair, Ford’s global product-development chief, who was based in Shanghai from 2008 to 2011 as vice president of operations in Asia. “These are different first-time buyers than we see in other markets.”

Previous article VW diesels, with operative emission...
Next article Why Honda is spending on shrinking...