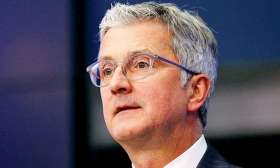 Back in Ingolstadt, assembly lines continued to churn out Audi vehicles at their usual pace.

Yes, it would have been just another busy week at the Volkswagen premium brand were it not for a little matter of the arrest and imprisonment of Audi's CEO, Rupert Stadler.

Stadler was apprehended at his home in the early morning hours of June 18 — a stunning development that company insiders say they didn't see coming. The 55-year-old executive could face charges of fraud in connection with "defeat device" software found in Audi diesel vehicles in Europe.

Evidence emerged that Audi had played a key role in developing the illegal emissions software while Stadler was CEO. A week after naming him a suspect in their investigation, German authorities swooped in after a wiretap reportedly indicated Stadler was influencing witnesses to cover up the affair. Brought immediately before a magistrate, the Audi CEO was denied bail on the grounds he might obstruct the investigation were he to remain at large.

That makes Stadler, the son of a Bavarian farmer who studied corporate finance in college, the highest-ranking official at Volkswagen Group to be arrested because of the scandal. He is the first German CEO to be taken into custody on the suspicion of corporate wrongdoing while still in office.